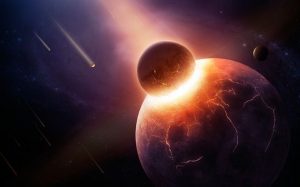 A new spin on the giant impact hypothesis says yes.

Scientists at UCLA have discovered that Earth is made up of two planets: Earth and Theia. Theia, a Mars-sized protoplanet, crashed into Earth 4.5 billion years ago when Earth was just 100 million years old. Previously, the giant impact hypothesis suggested that Theia sideswiped Earth, knocking off a chunk. That chunk, the theory goes, became the moon. Theia then continued on its journey through space.

However, this new research, published in the journal Science, suggests that when Theia collided with Earth, it hit head on and fused with Earth instead of continuing its trek through the stars. That means that Theia is still here, under our feet. It’s a part of Earth.

The study, which was funded by NASA, the Deep Carbon Observatory and a grant from the European Research Council, focused on comparing moon rocks to Earth matter. The findings led the research team to the conclusion that Earth and the moon are so similar because the moon was created at the same time that Theia impacted and altered Earth.

Richard Young, head researcher and professor of geochemistry and cosmochemistry, says that after the impact, “Theia was thoroughly mixed into both the Earth and the moon, and evenly dispersed between them.” The identical nature of moon and Earth matter has long confounded scientists in understanding the relationship between the two planetary bodies. To try and get a firm grasp on the expected differences, Young and his team compared seven moon rocks (brought back by the Apollo 12, 15 and 17 missions) to five Earth rocks. The terrestrial rocks were gathered from Earth’s mantle in Hawaii and Arizona. According to UCLA, “Young’s research team used state-of-the-art technology and techniques to make extraordinarily precise and careful measurements, and verified them with UCLA’s new mass spectrometer.”

A close-up view of a moon rock gathered during the Apollo 17 mission.
A close-up view of a lunar rock gathered during the Apollo 17 mission. This rock, and others like it, were used to compare oxygen atoms between moon and Earth rocks. (Photo: Christelle Snow/UCLA)
By studying the chemical signatures of the rocks’ oxygen atoms, Young and his team were able to determine that the moon and Earth-as-we-now-know-it did, in fact, result from the same event: Theia’s collision and fusion with Earth. Young elaborates, “This explains why we don’t see a different signature of Theia in the moon versus Earth.”

The head-on collision also raises questions about the origin of water on Earth. Young suggests that water could have been present before Theia’s impact, or it could have been brought to Earth by water-rich asteroid impacts millions of years later. Young notes that, “Collisions of growing bodies occurred very frequently back then.” Young points out that Mars seems to have escaped any such impacts — as far as we know.

Young also offers insight into the planet that could have been. Had Theia not collided and fused with Earth, it might have evolved from a planetary embryo into a true planet. However, we should be thankful that 4.5 billion years ago Theia undertook its crash course. Without it, we would not have the moon, and life as we know it would not exist.